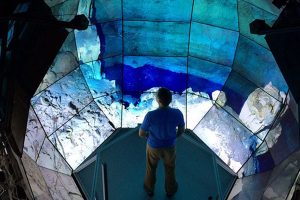 A Qualcomm Institute researcher studies a digital recreation of a submerged cave system that has revealed new findings about early life in the Americas.

With help from technology developed by UC San Diego researchers at the Qualcomm Institute, a team of underwater cave explorers in Mexico have made unprecedented archaeological discoveries in some of the most inaccessible places on Earth about the earliest inhabitants of the Western Hemisphere.

Published in the journal Science Advances, researchers from Canada and the United States, working with the cultural authorities of Mexico, report that caves in Quintana Roo on the Yucatan Peninsula are home to the oldest known ochre mines in the Americas. These findings reveal for the first time the purpose of ancient human activity in the submerged caves, as well as resource extraction practices used by the earliest inhabitants of the area.

Using software and techniques developed by Vid Petrovic, Eric Lo and Falko Kuester at the Qualcomm Institute, researchers recreated some of the submerged archaeological sites as interactive, 3D environments which can then be explored in more depth anywhere – from a researcher’s laptop or through the walk-in virtual reality facilities at UC San Diego. This capability allowed the international research team to plan expeditions in advance, promoting the safety of the dive crew and making for more efficient missions.

“Ongoing research in the submerged caves of Quintana Roo is contributing to a more holistic understanding of what life was like for the region’s earliest inhabitants,” said Dominique Rissolo, archaeologist and research scientist at the Qualcomm Institute and coauthor on the Science Advances paper. “In addition to evidence of mining, the caves contain abundant, diverse, and well-preserved plant and animal remains from the last Ice Age.”

Previously reported findings include Naia from Hoyo Negro, the most complete skeleton of these earliest Americans, which adds new details about how the Western Hemisphere was first populated.

While Naia added to the understanding of the ancestry, growth and development of these early Americans, little was known about why she and her contemporaries took the risk to enter the maze of caves found below the surface of the Yucatan Peninsula.

Additionally, Rissolo and engineers from Qualcomm Institute’s Prototyping Lab recently joined an international expedition to recover the pelvis of a giant ground sloth that roamed the area during the last Ice Age and was discovered at the bottom of Hoyo Negro. The team worked across international lines and tapped the talents of paleontologists, 3D-modeling experts, and engineering and virtual reality specialists to safely bring this fragment of history back to light. (Read more here.)

With exploration of these new sites just getting started, the potential for still more mysteries to be unlocked is enormous. To learn more about archaeological research efforts in the submerged caves of the Yucatan, please visit hoyonegro.ucsd.edu and CINDAQ. 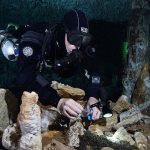 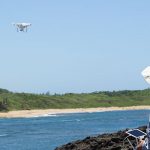