May 18, 2012 — In 1505 Leonardo da Vinci began painting a mural – to commemorate the Battle of Anghiari – in the Palazzo Vecchio’s Great Hall, the seat of government in Renaissance Florence. Fast forward 60 years: As artist Giorgio Vasari neared completion on a major renovation that raised the ceiling of the hall, da Vinci’s mural disappeared. In its place, on the expanded walls, Vasari painted his own murals. So what happened to Leonardo’s masterpiece?

Over the years University of California, San Diego bioengineering alumnus Maurizio Seracini, Class of ’73, discovered two important clues to the location of “The Battle of Anghiari”. First, he saw the words CERCA TROVA – seek and you shall find – painted on a tiny banner in Vasari’s mural, with the words not visible from the floor of the hall. Then came a series of radar and thermographic surveys, which con- firmed that part of the east wall was the only area hiding a thin pocket of air behind several square meters of the Vasari mural.

The findings lent credence to the theory that Vasari saved Leonardo’s mural by building a brick wall in front of it, then painting his own mural on the new wall.

Fast forward again, to March 2012: Media from around the world converged on the Hall of the 500 to hear preliminary results from a search for the long-lost mural, led by a team from UC San Diego.

As Jacobs School of Engineering structural engineering professor Seracini took the podium, he pointed methodically to evidence that the team may have pinpointed the location of the ‘lost Leonardo’.

“The results are very encouraging,” says Seracini, “but a lot more work needs to be done in order to prove the existence and current condition of The Battle of Anghiari beyond a shadow of a doubt.” 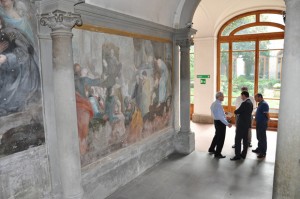 CISA3’s Maurizio Seracini (left) with regional officials in the ancestral home of Amerigo Vespucci, where a new UC San Diego research center will be located.

Seracini returned to San Diego in 2006 to become founding director of the Center of Interdisciplinary Science for Art, Architecture and Archaeology (CISA3), and later, a National Geographic Fellow.

In late 2011, Florence Mayor Matteo Renzi approved the use of a modified medical device, an endoscope, to look inside the wall. To limit any damage, UCSD collaborated with Florence’s top art conservation agency, the Opificio delle Pietre Dure, which drilled six tiny holes in locations that no longer contained original pigment or other materials applied by Vasari. The researchers then snaked an endoscopic probe with a minuscule camera and scooper through the holes.

After coming up empty with several holes, the research team discovered red flakes inside the wall that were organic – in a place where organic material normally should not be found. Other images showed a beige material inside the wall that could only have been applied with a paint brush. Most importantly, the probe retrieved a sample of black material which, with the help of a scanning electron microscope, proved to have a chemical composition similar to a black pigment found in brown glazes used on the “Mona Lisa”.

With the Opificio planning to perform restorations on the Vasari mural in 2013, the UCSD team hopes to collaborate on further probes in areas where no damage would be done to the original Vasari.

The Anghiari project garnered headlines around the world – highlighting the increasingly global reach of UC San Diego. Most of the U.S. students working on the project were funded by a $3.2 million, five-year grant from the National Science Foundation IGERT program to train graduate students in the new interdisciplinary field of what Seracini calls ‘cultural heritage engineering’. The project, led by CISA3’s Seracini and principal investigator Falko Kuester, is based in the California Institute for Telecommunications and Information Technology (Calit2). Half a dozen graduate students funded by NSF have spent from two weeks to six months in Florence working on the Anghiari project and their own research (including a survey by grad student and IGERT Trainee Christine Wittich of two dozen Florentine statues to assess how vulnerable they are to seismic tremors).

The bulk of funding, however, came from a dedicated group of private donors led by Qualcomm CEO Paul Jacobs and his wife Stacy, Fiji Water co-founder Doug Carlson, and other benefactors of CISA3, including Kevin and Tamara Kinsella, Robert and Natalie Englekirk, Rick Sandstrom and Sandra Timmons, Linda Brandes, Steve and Sue Hart, the Legler Benbough Foundation, and others. 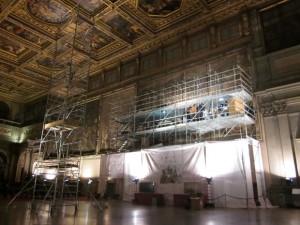 Says Seracini: “The importance and value of private support for this project and for our cultural heritage cannot be minimized.”

Prof. Seracini is now spearheading a permanent UC San Diego presence in Florence. Slated to open in late 2012, the new center will become a magnet for researchers from UCSD, other University of California campuses, and beyond. The Region of Tuscany is providing, free of charge, a 10,000-square-foot headquarters for the new UCSD center in an historic building in the heart of Florence – the birthplace and ancestral home of Amerigo Vespucci.

Seracini will be the center’s director, and he says officials in Tuscany hope the center will jumpstart collaborations not just in cultural heritage, but among U.S. and Italian researchers in medicine, health care, bioengineering and other fields where UC San Diego boasts a world-class reputation.

UCSD has already signed partnership agreements with the University of Florence and several other Italian campuses and research organizations.

While there are dozens of undergraduate study-abroad programs in Florence, the new UCSD center will be a breed apart as the only American university center in Florence tailored to research experiences for graduate students. Seracini believes it will put UCSD firmly on the map in Italy, and eventually trigger a steady stream in the other direction – of European students eager to do their graduate studies at UC San Diego. 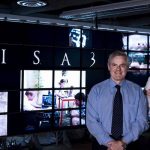 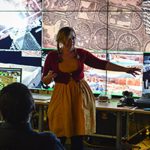