Richter, who is affiliated with the Qualcomm Institute’s Center of Interdisciplinary Science for Art, Architecture and Archaeology (CISA3) at UC San Diego, was honored for her efforts to understand the past by using high-tech, three-dimensional data visualization tools to analyze artifacts and excavation sites. She was one of the three students selected for the award in what Dean of Graduate Studies Kim Barrett called “an intense competition.”

“We have some of the best graduate students in the world at UC San Diego,” said Dean Barrett at the awards ceremony, which was held earlier this month. “These awards underscore how huge of a contribution graduate and professional students make to the life of this campus. You are absolutely pivotal.”

Added GSA President Jordan Gosselin: “The Interdisciplinary Research Awards honors the outstanding work of the people who turn the gears of research here at UC San Diego — the graduate and professional students — and recognizes their exceptional work. Ashley’s work has not only been recognized for excellence by her peers, but she has a proven ability to integrate and collaborate across disciplines as well as communicate her research effectively.”

The other two students to win the award were Burcu Ürgen of the Department of Cognitive Science and Tara Whitty of the Scripps Institution of Oceanography (SIO). Ürgen won for her work on “Spatiotemporal neuroimaging of visual processing of body movements in humans” and Whitty won for her work “Following dolphins and talking with fishers: Under- standing the human side of dolphin conservation in Southeast Asia.”

Richter, who is a descendant of the Danish antiquarian and ‘Renaissance man’ Ole Worm, said she was especially honored to win the award because it recognizes the interdisciplinary nature of her research. Her approach incorporates principles of computer science and engineering (such as using a LiDAR scanner to create digital ‘point clouds’ of archaeological sites) as well as traditional archaeological methods.

“Too often in the field of archaeology, moving the knowledge forward is broken down by the politics of departments, who don’t want to ‘share’ researchers,” Richter said. “But there’s a move in archaeology for that to be rectified. The Anthropology Department at UCSD, for example, recognizes that archaeology and anthropology are all part and parcel of the same thing. That’s not something a lot of universities would encourage, particularly in such an academia-bound field.”

Richter has recently expanded her work to advance the emerging field of “rescue archaeology,” which aims to create and preserve digital renditions of historically valuable sites that are threatened by development, natural disaster or conflict. Together with her faculty advisor, Anthropology Professor Thomas Levy, Richter and a team of researchers – including her primary Computer Science collaborators, CISA3’s Vid Petrovic and David Vanoni – conducted a 3D digital scan last winter of Umm al Amad, an ancient Roman cave mine in Jordan that soon could be lost to development. This fall, she will travel to Italy to collaborate with the University of Calabria on a rescue archaeology project to digitally document Etruscan tombs along the Mediterranean.

“We need to collect this data now, and we need to build information systems to use it and disseminate it. As we move forward,” noted Richter, “we’re destroying our past.”

Richter is also working with her engineering advisor and CISA3 Director Falko Kuester to create a comprehensive digital scan of San Diego’s Balboa Park in advance of its centennial celebration. The team will test out various camera systems to conduct the scan, including 3D CAVECams, panorama cameras, gigapans and omnipresent structure-for-motion systems, which make it possible to create a “point cloud” from photographs.

“I am so proud of Ashley,” remarked Levy upon the announcement of her award. “She embodies the essence of interdisciplinary research for 21st century archaeology. Not only has she pushed the envelope with using LiDAR technology in our excavations in Jordan, but thanks to her enthusiasm she has encouraged other graduate students from computer science and engineering to join us in the field. Helping us to work together, Ashley has helped create a dynamic research atmosphere.”

That atmosphere includes a new series of undergraduate research scholarships that Richter helped establish to broaden the reach of CISA3 on the UC San Diego campus. The CISA3 Undergraduate Research Internship (CURI) program has recruited 24 undergrads from disciplines as disparate as linguistics and oceanography.

Those students, in collaboration with Richter and other CISA3 researchers, are working to expand the principles of cyberarchaeology by applying them to their own disciplines. Linguistics major Bridget McGovern, for example, is designing a digital coloring book for children that introduces them to basic concepts of archaeology, while lead intern Aliya Hoff is working with oceanographer Jules Jaffe’s lab at SIO to develop enhanced methods for collecting data from underwater archaeological sites.

“It really is just a huge massive collaboration, and I’m throwing undergrads into the mix,” explained Richter. “It’s only the willing- ness of our partners to apply what they’re building to these wider, cumulative goals for collecting, visualizing and disseminating cultural heritage information that makes this all possible.”

Next up for Richter: Participating in the National Science Foundation Integrative Graduate Education and Research Traineeship (IGERT) poster and video competition, which takes place online from May 21-24. Richter will represent CISA3’s IGERT Training, Research and Education in Engineering for Cultural Heritage Diagnostics (TEECH) program with a poster and video that will include field photos, interviews and point cloud models. They present what she calls “a speedy little visual history of why visu- alization has always been a part of archaeology, but never at the forefront.” 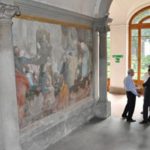 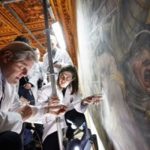