February 14, 2013 — If the Center of Interdisciplinary Science for Art, Architecture and Archaeology (CISA3) was to host a true

“Open Lab Night,” it would have to not only fly participants to far-fetched regions of the world, but also transport them in time. 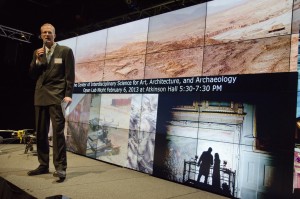 Falko Kuester described the work of CISA3 as “managing the life cycle of cultural heritage to create a future for the past.”

That’s because CISA3, which is based at the University of California, San Diego division of the California Institute for Telecommunications and Information Technology (Calit2), is all about “managing the life cycle of cultural heritage to create a future for the past,” explained CISA3 Director Falko Kuester. Although its labs include visualization facilities at Calit2’s Atkinson Hall — super high-resolution displays, both large and small, used for analyzing huge sets of data — CISA3’s scope also includes archaeological field work carried out primarily in the Middle East, a hunt for a lost painting by Leonardo da Vinci in Italy’s Palazzo Vecchio and efforts to preserve artifacts and works of art in museums that haven’t even been created yet.

Much of this work is funded by the National Science Foundation’s Integrative Graduate Education and Research Traineeship (IGERT) program, and was on display for one evening last week. Graduate students in the IGERT program and other CISA3 representatives conducted more than 20 demonstrations at the event, some of them sharing technologies that have never before been viewed by the public.

That many of these students will go on to get their dream jobs is n early a given. Kuester noted that the center’s “many-brains approach,” where local talent from many disciplines are connected with the world-at-large, has succeeded in graduating students, year after year, who “go on to get the job they wanted.”

One of those students, past anthropology graduate Neil Smith, has recently been hired by Saudi Arabia’s King Abdullah University of Science and Technology (KAUST) to head its emerging cyberarchaeology program. Calit2’s collaboration with KAUST has already resulted in a fruitful technology exchange, and it’s not difficult to imagine that KAUST will see value in adopting some of the newest technologies out of CISA3.

Take CISA3’s digital tourism platform, called ARtifact. The tool, which is essentially an app that turns any smart device into an augmented reality platform, highlights visual elements within an artifact and provides additional information about those elements. 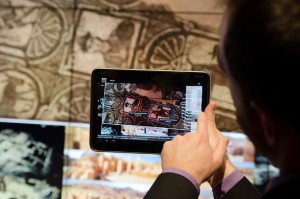 Using a LiDAR dataset taken from inside a Byzantine Church in Petra, IGERT scholar David Vanoni demonstrated the efficacy of the device at Open Lab Night by holding his handheld tablet over a LiDAR image of the church’s intricate mosaic tiles. The device’s camera ‘recognized’ the image and provided pop-up text that provided more details about the site and what the viewer was seeing.

Vanoni said the technology also has applications for his CISA3 colleagues who conduct archaeological digs. “With this technology,” he noted, “they could use the tablet to identify where they are on the site, bring up the location of artifacts, and be able to edit the information in real-time.” 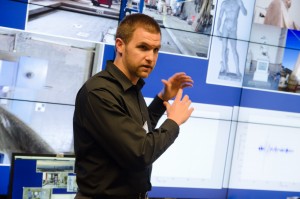 Archaeologists — or any of their CISA3 collaborators in art history, computer science, and chemical and structural engineering — could then view that data independently, at the same time, from labs around the world using another CISA3-developed technology, MediaCommons. MediaCommons, which was demonstrated at the event by computer scientist John Mangan, is a Multi-Purpose Framework (MPF) application that allows various types of data (including video images, panoramic images and flat images) to be viewed remotely, and simultaneously, on multiple displays.

Mangan added that the tool he and Calit2 computer scientist David Srour developed will eventually incorporate stereoscopy (3D) and alioscopy (3D visualization without the need for glasses) in addition to the current 2D projection available. 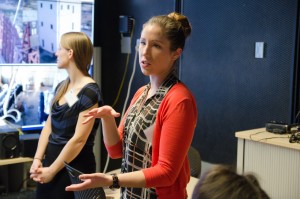 CISA3 structural engineer Michelle Chen discussed her efforts to understand the interaction between structural and non-structural components during an earthquake.

Being able to visualize three-dimensional data is important to the work of CISA3 structural engineer Michelle Chen, whose work focuses on understanding the interaction between structural and nonstructural components during an earthquake. Chen made use of one of the CISA3 OptIPortables — portable high-resolution dis- play walls — to display a collection of data she and her colleagues had gathered from more than 85 cameras and 500 analog sensors as part of a test using the UCSD Shake Table (the resulting video featured both internal and external shots of a multi-story building being jostled during a simulated earthquake).

Chen said that from CISA3’s perspective, the data illustrate the importance of “incorporating protective systems as a way of retro- fitting historical buildings and protecting nonstructural elements” such as fragile museum artifacts.

“The braces and sheer walls that are commonly used to retrofit buildings can’t always be used for historic buildings because they damage building characteristics. You have to add walls where there weren’t walls before,” she explained.

Chen’s research is being conducted as part of the Building Non- structural Components and Systems (BNCS) project, a unique collaboration between academia, government and industry de- signed to help understand earthquake and post-earthquake fire resiliency of nonstructural components and systems. Chen said that future research will include an in-depth study on the high damping rubber base isolation system that is used around the world to protect historical buildings, as well as those with valuable contents.

Given the technologies on display at Open Lab Night, even Atkinson Hall fits that bill. 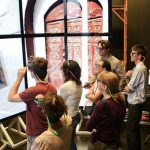