Diving for the Bones of the Ice Age

For thousands of years, the massive pelvis lay undisturbed at the bottom of the watery black pit. Approximately four feet across and weighing an estimated 80 pounds, it had once belonged to a giant ground sloth, an elephant-sized animal that roamed the ancient Americas alongside the saber-tooth cat and the woolly mammoth.

Sometime during its life, the sloth lumbered into a labyrinth cave system and wandered until it encountered the subterranean pit known today as Hoyo Negro, or “Black Hole.” Blind in the darkness, the sloth took a fatal step over the edge of the pit and plummeted nearly 100 feet. The impact would have killed it instantly. 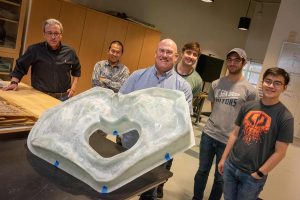 These days, Hoyo Negro is a morbid treasure trove for paleontologists: a collection of partially fossilized, Ice Age-era skeletons belonging to saber-tooth cats, several species of ground sloths, an extinct species of bear and Naia, a young woman who lived and died approximately 13,000 years ago. Dominique Rissolo, a research scientist and archaeologist with UC San Diego’s Qualcomm Institute (QI), and colleagues have studied their bones for the past eight years to learn more about the region’s history.

“The abundance, diversity, and integrity of Late Pleistocene fossils from Hoyo Negro give us a unique opportunity to reconstruct animal and plant life on the Yucatán Peninsula at the end of the last Ice Age,” said Rissolo.

In November 2019, a group of researchers including Rissolo and a cave diving team led by Alberto Nava set out to recover the giant ground sloth’s pelvis through a meticulously planned expedition. Rising sea levels had flooded the cave system at the end of the last Ice Age, making the pelvis’ retrieval impossible for all but the most experienced divers. Over the course of the expedition, the team would have to work across international lines and unite talents in paleontology, 3D-modeling, engineering and virtual reality to safely bring this fragment of history back to light.

New discovery (and a challenge) for science

Cave divers discovered the giant ground sloth’s remains during initial dives into Hoyo Negro in 2007. Under the direction of Mexico’s National Institute of Anthropology and History (INAH) and the expert guidance of James Chatters and Blaine Schubert, paleontologists specializing in late-Ice Age species, divers removed all of the sloth’s bones save for a few vertebrae, an arm and its pelvis. With the bones in hand, researchers made a marvelous discovery: the sloth was a member of an entirely new species.

“For a new species, it’s pretty good to have that much [of the skeleton],” said Chatters. “The preservation is absolutely incredible.”

Scientists named the giant ground sloth Nohochichak xibalbahkah, Mayan for “The great claw that dwells in the underworld.” Alive, it would have stood at six to seven feet on its hind legs and weighed an estimated 2,000 pounds. Its pelvis was the last major bone missing from its skeleton and a key component in reconstructing its likeness.

Rissolo and colleagues began preparing for the effort to retrieve the pelvis a full year in advance. Using QI’s high-resolution, walk-in virtual reality facility, the SunCAVE, they planned the divers’ route through the cave system and into Hoyo Negro. From the diving platform, the divers would descend in almost complete darkness into a narrow corridor and travel 200 feet to the edge of the black pit. The pelvis lay 90 feet below, upside down and darkened with age. 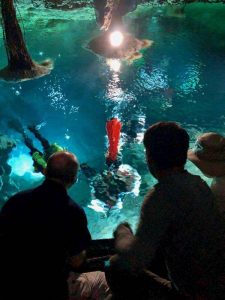 The bone’s remarkable size posed an additional challenge. The team would have to design a support frame that was sturdy enough to protect its cargo, but not so bulky that it would scrape against the tunnel walls. Using images captured during a previous dive, Chatters and engineers at the QI Prototyping Lab, QI Drone Lab and East Tennessee State University recreated the pelvis as a 3D, digital model that they could rotate and study in close detail. Now, they could identify weak spots in the bone and design a frame that would cradle each part of the pelvis.

The design seemed to be coming along. The bulk of the team had already set out for the Yucatán to prepare the camp site and look after logistics. All that remained was for the engineering team back home to finish their design, 3D-print the frame and send it on its way.

Then, days before the dive, researchers had to abandon their plan. The frame they’d drafted was too expensive to produce, and its dimensions made it impossible for their 3D printer to process.

In a burst of inspiration, Brett Butler, an engineer with the QI Prototyping Lab, turned to a local surfboard shaper with a background in industry. The engineering team needed a material that would be easy to maneuver underwater and fiberglass, a material used to build surfboards, fit the description. Butler told the surfboard shaper what he had in mind.

“Of course, he thought I was crazy,” said Butler. “Who would call someone and ask them to help build a custom cradle for a 40,000-year-old giant ground sloth pelvis within a week?”

Luckily, the surfboard shaper agreed. As he crafted a cradle for the sloth’s pelvis out of fiberglass, Butler and the other engineers created supporting materials that would protect the pelvis as it was lifted by divers from its depth of 140 feet below sea level, hoisted 30 feet up and out of the cave entrance, and driven over jungle roads.

They finished just in time. On November 11, 2019, Butler flew to Mexico to deliver the pelvis’s cradle to the team waiting in the jungles of the Yucatán. Soon afterward, Rissolo, Butler and their colleagues settled in to watch as divers strapped on layers of dive gear, checked their closed circuit rebreathers, and ferried their invention into the cave.

The team waited four hours for the divers to return. Emotions during the wait were mixed; Chatters, who had eight years of experience extracting fossils from Hoyo Negro, said he felt confident that the divers had a reliable routine. Others were less sanguine. 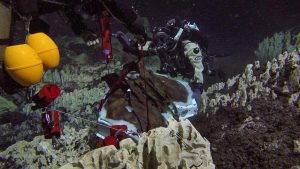 For thousands of years, the fossilized pelvis lay submerged, upside down, on the floor of Hoyo Negro, the “Black Hole.” Here, cave divers attach an engineered framework to the pelvis to lift it from the cave floor. Photo Credit: Mike Madden and Sam Meacham, CINDAQ

When the divers reappeared below the diving platform for a safety stop, pelvis in tow, the entire camp celebrated. Team members took turns lying on the platform with their faces in the water, peering through a dive mask at the fossil they had dreamed of for months.

“The giant ground sloth pelvis is the biggest fossil ever recovered from Hoyo Negro and the underwater portion of the recovery went exactly as planned and rehearsed. It was a fantastic way to end a long day in the jungle,” said Butler.

The team used their engineered cradle to connect the pelvis to a line-and-pulley system and hoisted it 30 feet from the diving platform through the mouth of the cave. A final cheer heralded the fossil’s return to the world aboveground, and a success for the partnership between paleontology and engineering.

After weathering thousands of years underwater, the pelvis now rests within Mexico’s National Museum of Anthropology. The information gleaned from the fossil will contribute to INAH’s larger mission of documenting, studying and preserving Mexico’s paleontological history. Roberto Junco Sanchez, Subdirector of Underwater Archaeology with INAH, says that the next step will be to share the results with others for future research.

“It’s a unique opportunity to study new species, a heaven in terms of the Pleistocene fauna that roamed the Yucatán,” said Junco Sanchez.

The effort to recover the pelvis of Nohochichak xibalbahkah was a highly collaborative process that drew on partnerships with many individuals and organizations. In addition to those named in the text, CHEI would like to thank Helena Barba Meinecke, Director of the Hoyo Negro Project; Brian Strauss; divers Roberto Chavez and Alex Alvarez; Christian McDonald of the Scripps Institution of Oceanography, professional photographer and videographer Mike Madden; scientific diver Sam Meacham of El Centro Investigador del Sistema Acuífero de Quintana Roo; Vid Petrovic, computer scientist and software engineer at QI; David Zollinger, engineer at East Tennessee State University; and Jeffrey Sandubrae and Falko Kuester at QI. The team acknowledges the invaluable contributions of the late Pilar Luna Erreguerena and support from the UC San Diego Academic Senate. 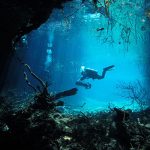 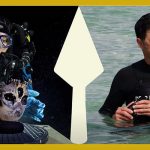