San Diego, Calif., Dec. 10, 2015 — The city of Granada, Spain is steeped in cultural heritage: home to the Alhambra and to world-famous Moorish and Morisco architecture, it is a perennial destination for tourists and sightseers. But for five days this past fall, the city also attracted culture seekers of another kind: researchers attending the 2015 Digital Heritage Conference, including a team from UC San Diego’s Center of Interdisciplinary Science for Art, Architecture and Archaeology (CISA3). 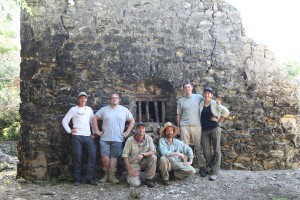 Organized by the Division of Arts & Humanities, the Jacobs School of Engineering and the Qualcomm Institute, the UC San Diego division of the California Institute for Telecommunications and Information Technology (Calit2), CISA3 has made its name as a hub for cultural heritage engineering—writ broadly, the application of fields such as robotics, computer science and virtual reality to the study of cultural sites and artifacts. According to CISA3 Director Falko Kuester, the annual Digital Heritage Conference is “the top-tier event” within this area of study, and CISA3’s researchers “stood out” there for the quality, quantity and diversity of their accepted papers.

Among the research papers emerging from UC San Diego and presented at the conference were those spanning robotics and unmanned aerial vehicles for remote imaging and digital preservation of endangered sites, as well as hyper-spectral imaging techniques for the analysis and preservation of paintings. Other papers focused on photogrammetry techniques for underwater cave documentation and investigation, digital and cyber-archaeology, cyber-infrastucture for open source data sharing and more.

“It is great to see that our students truly have become the domain experts in areas of inquiry that they present,” said Kuester.

Kuester credits CISA3 with helping San Diego “establish and grow its role as the global leader for cultural heritage engineering,” and noted that the students’ work in particular has caught the eye of industry professionals. Two of CISA3’s students have been recruited to lead software development teams at San Diego-based educational media companies, or “edutainment” companies.

“I believe this truly speaks to the breadth and depth of talent being created,” Kuester said.

Following are two examples of the work presented by CISA3’s students and researchers in Granada.

Modeling One of the Americas’ Oldest Church Sites

To Mike Hess, one of CISA3’s greatest strengths is its inventiveness: the center is unafraid to tackle the field’s technological obstacles head-on.

“A lot of people just use technologies, but we actually develop solutions,” said Hess, who is a trainee in CISA3’s Training, Research and Education in Engineering Cultural Heritage Diagnostics (TEECH) project, funded by the National Science Foundation’s Integrative Graduate Education and Research Traineeship (IGERT) program. “It’s not just about using technologies; it’s about developing new ones and figuring out how to integrate them all into one usable source of data.”

The paper Hess presented in Granada reflects this fact clearly. Using data from CISA3’s 2014 trip to Ecab in Quintana Roo, Mexico—the site of what is thought to be one of the first churches in the Americas—Hess modeled the benefits of stitching together data from multiple imaging techniques, enabling researchers to construct a fuller 3D model of a given archaeological site.

Abandoned since the 1640s, the Ecab church site has weathered disasters both natural and manmade: its location at the northeastern tip of the Yucatán Peninsula, jutting out into the Caribbean Sea and the Gulf of Mexico, makes it vulnerable to hurricanes, while looters are believed to have stolen the church’s altarpiece. Today the site is so remote and difficult to access—it requires a two-hour boat trip each way—that the CISA3 team was able to spend only two days there.

In cooperation with Mexico’s National Institute of Anthropology and History (INAH), the government agency responsible for the nation’s cultural heritage, Hess and the other CISA3 researchers set out to document the Ecab site in its entirety, using a variety of imaging techniques to create a comprehensive 3D model with which researchers could analyze the site remotely. To do so, they used terrestrial laser scanning, sometimes called Light Detection and Ranging (LiDAR), a time-consuming but highly precise technology in which a scanner aims lasers at a building or structure to collect distance measurements. The fine-grained, high-resolution data acquired through this method allow researchers to construct detailed 3D point clouds that represent the scanned building. CISA3 also made use of faster and more affordable (but less precise) ground- and aerial-based photogrammetry techniques like Structure from Motion (SfM), which can combine pictures taken from different angles into photorealistic 3D models.

Because of their limited time at Ecab, the CISA3 team could not finish documenting the full church site, leaving them with incomplete, but complementary, data sets. Faced with this state of affairs, Hess and other researchers at CISA3 set about finding a solution. The most effective plan was to use their terrestrial laser scans as a sort of scaffold onto which their photogrammetry data could be projected, filling in the gaps of their missing information and adding more realistic visual effects into the bargain. Their final model comprises one billion data points. 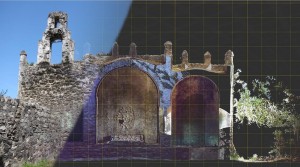 For Hess, the benefits of combining these data sets are manifold. For one thing, it’s invaluable to have such a large amount of data in one model: “Being able to render that in real time is extremely useful, and you don’t see it in commercial systems.” For another, a 3D model of fused data sets can allow researchers to maximize the time they spend analyzing their data; time spent in the field can be shortened accordingly.

“The data [in the fused model] allow you to virtually be on site and take measurements to one-millimeter accuracy,” said Hess, “so they enable analysis and interpretation—and also eliminate the need to travel.”

With the full 3D model in hand, Hess’s hopes are set on creating an effective conservation plan for the site.

“We’re just waiting for the go-ahead from INAH,” he said, “and we’ll do whatever they need to facilitate their decisions.”

Not far from Ecab on the Yucatán Peninsula lies Hoyo Negro, an underwater cave most famous for housing “Naia,” a 12,000- to 13,000-year-old female skeleton and the oldest near-complete set of human remains discovered in the Americas. It’s also a place of ongoing research for CISA3 Special Projects Coordinator Dominique Rissolo, who is co-director and project archaeologist for the site.

Like Ecab, Hoyo Negro is remote and difficult to access; only highly trained divers are capable of navigating it. Unlike Ecab, however, the cave’s conditions—dark, flooded with water, topographically complex—are fundamentally unfavorable to documentation, complicating efforts to construct a 3D model of the site for remote analysis. At times, its inhospitable conditions even endanger those who attempt to explore it, and the time divers can spend in the cave (“bottom-time”) is accordingly limited. Though prior work at the site has allowed researchers to map the cave, date Naia’s remains, study the skeleton’s mitochondrial DNA and reconstruct the site’s evolution over millennia, existing existing photogrammetry and SfM methodologies have proved insufficient for constructing the 3D model researchers seek.

For Rissolo and his fellow researchers at CISA3, however, this 3D model will soon become a reality.

“Our field lead on the underwater photogrammetry work at Hoyo Negro, Alberto Nava, is working closely with Vid Petrovic, Sabrina Trinh and our CISA3 team to process and visualize data in ways that make remote analysis of the site possible,” he said.

Rissolo was a key player in the acquisition of this data. The paper he presented at the 2015 Digital Heritage Conference establishes new methodologies for the site’s photogrammetric documentation, offering unique guidelines for three scales of imaging: site-scale, feature-scale and object-scale. They are designed pragmatically, with an eye to supporting the researchers’ most specific interests, while simultaneously defending both the site and its investigators from damage.

“It is not practical, given limited bottom-time and the consequences of frequent adjustments to diver buoyancy, to produce a model of the highest resolution and the highest level of coverage for the entire site,” said Rissolo.

This work is further complicated, he added, by the inherent technical demands of photogrammetry. “Working in a completely dark environment makes it very difficult to compose shots,” he said. “Divers have to manage both lights and strobes in the process, and they have to ensure a systematic approach to image capture. This is very difficult while floating in a black abyss and managing their life-support systems.”

CISA3’s integrative cultural heritage engineering methodology allows for full imaging of the site, as well as for precise records of specific elements.

“The goal is to cover as much bottom as possible at a reasonable resolution,” he said. “The idea is then to focus more intensive and detailed photogrammetric recording efforts on those deposits or objects of specific interest to the anthropologists, paleontologists and geologists on the project.”

It’s a development with great potential to accelerate research on Hoyo Negro—and, Rissolo added, CISA3 will continue to play an integral part in it moving forward, bringing remote analysis of the site within reach. 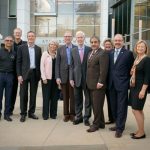 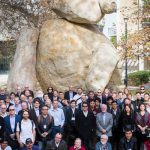