San Diego, Calif., May 12, 2015 — Given that the motto of this year’s Computer Applications and Quantitative Methods in Archaeology (CAA) Conference was “Keep the Revolution Going,” it’s fitting that three of the most well-received presentations at the event were by some of the leaders in this “revolution” – representatives from the Qualcomm Institute’s CISA3.

CISA3, or the Center for Interdisciplinary Science for Art, Architecture and Archaeology, is based at the University of California, San Diego division of the California Institute for Telecommunications and Information Technology, also known as the Qualcomm Institute (QI). Researchers there are known for being early adopters of ‘cyberarchaeology’ and the use of digital technologies at archaeological field sites.

Representing CISA3 at the conference – which was held March 29 to April 3 in Siena, Italy – were  graduate students Christine Wittich and Samantha Stout, as well as Special Projects Coordinator Dominique Rissolo.  The trio of scholars presented on three distinct topics at the conference, showing the breadth and depth of the research pursued at CISA3.

Stout, a graduate student in materials science and engineering who has spent most of her time at CISA3 researching the development of methodologies, says that the feedback from other attendees was “overwhelmingly positive.”

“CAA offered an incredible venue to begin collectivizing and disseminating our research approach,” added Stout, who is a trainee with the National Science Foundation’s Integrative Gradaute Education in Research Traineeship (IGERT) for Training, Research and Education in Engineering for Cultural Heritage Diagnostics (TEECH). “Overall, our center is used to bringing engineering solutions to the table, but we also are comparatively close to the problem. We have a direct access into the working environments of archaeological researchers, so the collaborative effort can take into account all the nuances of the craft of the profession.”

Christine Wittich, a Ph.D. candidate in the UC San Diego Structural Engineering Department and an IGERT-TEECH trainee, presented her work on recent experimental tests on massive archaeological artifacts from Saudi Arabia as part of the Roads of Arabia exhibition organized by The Smithsonian.

CISA3 Director and UC San Diego Jacobs School of Engineering Professor Falko Kuester noted that “as recent events in Nepal and elsewhere have so dramatically demonstrated, extreme events such as earthquakes can severely scar or destroy cultural heritage at massive scales, almost instantaneously. Finding new engineering solutions needed to protect our cultural patrimony is one of the overarching goals of CISA3.”

In her presentation at a session titled “New Trends in 3D Archaeology,” Wittich explored ways to protect sculptures from earthquake damage. Her research was derived from tests conducted at the Asian Art Museum in San Francisco. Due to the high seismic risk in the San Francisco area, Christine and her advisor, UC San Diego Professor Tara C. Hutchinson, conducted non-destructive modal analyses in which the vibration characteristics of sculptures are determined.

“With this information, engineers can predict  earthquake forces and determine seismic mitigation methods,” noted Wittich. “This type of testing and subsequent analyses had never been presented to this archaeological community and the archaeologists present were enthusiastic about collaborating with structural engineers on the new frontier that science and engineering are creating.”

Dominique Rissolo shared the team’s research on underwater structure-from-motion (SfM) image acquisition and processing in a session entitled “Digital Frontiers in Maritime Archaeology.” SfM is a method for generating 3D reconstructions from 2D photographs and has been widely adopted as an accessible and powerful technique for rapidly documenting and visualizing archaeological objects, features and sites. However, its application in underwater environments presents certain physical and methodological challenges. CISA3 students – including Michael Bianco, Eric Lo, Perry Naughton, Vid Petrovich and Antonella Wilby – are developing new tools and advanced protocols for underwater SfM documentation and visualization of underwater cultural heritage sites.

“It was great to attend the conference along with Dominique because he has an accomplished background in archaeology, but he knows deeply about the engineering research at CISA3,” said Stout. “He could introduce us to colleagues and facilitate conversation, highlighting the true value and importance of our work to the field. We found that people were pleasantly surprised to learn of our research directions and innovations, both hardware- and software-based, as well as the unique incubator that is CISA3.”

For her paper at CAA, Stout transferred her work on the theory of diagnostic practice for cultural heritage artifacts to the realm of the archaeological field site, interviewing several members of the Levantine Archaeology Lab, which is directed by UC San Diego Prof. Thomas Levy, the associate director of CISA3.

“The question proposed by the section was: Do we need a theoretical framework for applying digital technologies in the field? And I tried to answer that through a rational thought process based on the practice I had discovered in the Levantine Lab,” said Stout.

She said her critique provoked many nods around the room, as well as questions from ‘purists’. “I would say that as it stands now, we are getting by OK without a well-defined theory, but the future best practice will be to rigorously evaluate technologies and assess their impact from a variety of angles, implement them to their fullest and use the extra time on-site to capture intangibles in the so-called old-fashioned way, so as to decrease the risk of instrumental bias.  This approach will most-certainly rely on communication between the engineers and developers and the archaeologist/anthropologist users.”

After the group returned to UC San Diego, a ScanLab exhibit, titled Autonomous Sensing, opened in the Calit2 gallery, providing an artistic illustration of some of the themes discussed at the conference.

“After all, sometimes laser scanners make ‘mistakes’,” said Kuester, referring to the LiDAR laser scanners cyberarchaelogists use to document cultural heritage sites. “It’s all the more reason to understand how and why we use them to document and preserve sites. Bringing members of the Visual Arts department, who confront sometimes abstract conceptions of theory on a more regular basis, can work to spur new developments of the theory of methodological practice for archaeology as well.”

The CISA3 IGERT team also had a strong presence at the 80th annual meeting of the Society of American Archaeology, the largest annual gathering of archaeologists in the Americas. Eleven participating students, faculty and associates were represented at the conference, which was held April 15-19 in San Francisco.

Samantha Stout represented CISA3 late last month in Catania, Italy, at TECHNART 2015 in three presentations taking place in two different venues. The first was in the small town of Aci Sant’Antonio, where a cycle of wall paintings was discovered in 2012 in a chapel of the Mother Church. A diagnostic campaign was organized by CISA3 collaborator, Antonino Cosentino, to assess the state of conservation of the paintings, their materials and technique and eventually plan for a restoration project. After nearly two years of bringing several international collaborators to the site, the results were presented on April 26 to the members of the city and the church, including the mayor.

Stout traveled to Aci Sant’Antonio as part of a CISA3 NSF-IGERT contingency to carry out x-ray fluorescence (XRF) analysis on the pigments of the frescoes. She recounted her research findings in Italian to the attendees, as the research group sought to advocate for fundraising in support of the restoration – a restoration that can now be carried out using the knowledge obtained from the diagnostic exams.

The XRF results have also been published in the journal Archeomatica, and the article was selected for the cover image and as the featured English language article in the primarily Italian journal. More information about the project and ongoing collaboration can be found on Cosentino’s blog.

Throughout the rest of the week, Stout attended the Technart conference on non-destructive and microanalytical techniques in art and cultural heritage, first presenting a poster on the work from the Aci Sant’Antonio wall paintings, and then presenting a poster on the on-going project at CISA3 to develop an automated, robotic multispectral imaging platform. Also presented were the preliminary results and performance of the WAVEcam imaging system created to capture ultra-high resolution imagery for the Hearing Landscapes  project conducted by Composer in Residence, Lei Liang and funded by a Calit2 CSRO grant.

“The conference was able to illuminate for me the research direction and where we can really innovate with the next capabilities of the imager,” said Stout “I found that there are not many engineers working on this problem – mostly chemists and other scientists – so we can really bring a different approach that is valuable. It was great that the Calit2 Strategic Research Opportunity project was able to spur us into building the first prototype.

Eventually, the system will be adapted to gain its full capabilities as the WAVEcam, a project developed by CISA3 Director Prof. Falko Kuester with assistance from Stout as well as James Strawson (IGERT-TEECH), Eric Lo (QI Robotics Engineer). 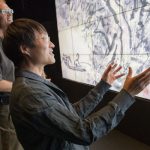 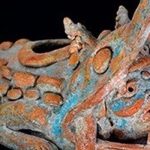