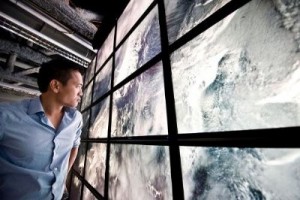 The partnership between the Qualcomm Institute’s Albert Lin, TopCoder and NASA invites coders to participate in a three-week challenge to build a powerful machine-learning algorithm to identify ground features in satellite images of Mongolia.

September 13, 2013 — A crowdsourcing effort led by University of California, San Diego research scientist Albert Yu-Min Lin is central to a new challenge as programmers worldwide are invited to develop a machine-learning algorithm to match human perception in picking out interesting features in satellite imagery. While the images come from Lin’s search for the lost burial site of Genghis Khan, a new algorithm could help NASA scientists decipher images of distant planets.

The three-week Collective Minds & Machines Exploration Challenge asks TopCoder community members from around the world to study a massive data set of crowdsourced, human-generated analytics tags of satellite imagery of the uninhabited landscape of Northern Mongolia, a likely location of the lost tomb. They are challenged to develop an algorithm that learns from the crowd, and emulates the sensitivity of human perception when recognizing and categorizing subtle details and features in images (for example, to pick out topographical features that could indicate the presence of an ancient human-built structure). Once developed, the algorithm could integrate machines and crowds to accelerate discovery in a wide array of big data problems ranging from planetary to medical imaging exploration. The partnership between the Qualcomm Institute’s Albert Lin, TopCod- er and NASA invites coders to participate in a three-week challenge to build a powerful machine-learning algorithm to identify ground features in satellite images of Mongolia. Click here to watch a video about the challenge to the coding community.

Lin recently applied the concept of crowdsourcing to an ambitious satellite imagery labeling initiative. In the first-of-its-kind collective exploration experiment, tens of thousands of amateur analysts worldwide helped Lin’s team at UC San Diego identify sites of cul- tural and historical significance. “Here we turn towards the crowd not only to tackle the data size challenge of large-scale satellite remote sensing, but more importantly to pool human perception and intuition when sifting through the data for anything that looks ‘out of the ordinary,’” said Lin. His team then mounted a series of land expeditions to verify regions of high interest defined by the crowd.

On the heels of this successful crowdsourcing application, Lin turned to researchers at the Harvard NASA Tournament Lab and TopCoder to leverage open innovation. Their goal: to develop an algorithm that can amplify the power of crowdsourced human perception when presented with ill-defined patterns. 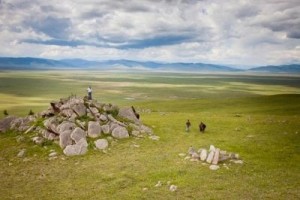 Better algorithms for detecting human-built structures from satellite images will enhance exploration in space and on Earth, by accelerating how NASA assesses planetary imagery. The goal is to identify, protect and preserve the integrity of undiscovered sites of cultural and historical significance worldwide.

“In science, data sets continue to get bigger and answers continue to get fuzzier,” noted Lin. “A collaboration between machine and crowd is a natural next step as we face the increasingly overwhelming data avalanches of our digital world.”

To respect the traditional beliefs of indigenous people, Lin and his team have used state-of-the-art technologies to conduct a noninvasive survey of Genghis Khan’s homeland. While Lin’s work enabled the online crowd of explorers to detect and label human-built structures in satellite imagery, TopCoder is challenging its community to develop an active, machine-learning algorithm that matches human capabil- ity. The successful algorithm will allow machines to learn as they compute and respond to the human input data from the crowdsourcing initiative. The long-term goal of this project is to create an algorithm that exceeds human capability.

“The quest to find Genghis Khan’s tomb has mystified scientists for hundreds of years,” said TopCoder President and COO Rob Hughes. “This powerful new algorithm will accelerate Albert’s research and realize the full potential of blending collective human intelligence with machine learning created through open innovation. The TopCoder community’s cutting-edge solutions are a natural fit for NTL and a technology-enabled explorer like Lin, whose mission is to uncover humankind’s best kept secrets.”

The Collective Minds & Machines Exploration Challenge was developed through the NTL, a collaboration between NASA, Harvard Business School in association with the Institute of Quantitative Social Science, and TopCoder. It allows the TopCoder com- munity to compete to create the most in- novative, efficient and optimized solutions for specific, real-world challenges. UC San Diego, where Lin co-directs the Engineers for Exploration Program, is experimenting with mechanisms to discern locations of ancient archeological places using satel- lite images. NASA and UC San Diego will work together to harness UC San Diego’s previous efforts and the resources of the NTL to produce code that will analyze open-source aircraft and satellite images by using amateur feedback for classifica- tion. NASA can then apply this same technology to imagery assessment of planetary objects.

The Valley of the Khans Project

Albert Lin’s research has taken him into the most remote regions of the world, has led to industry- changing innovations and has expanded the role of media in science. The effort he is most known for, the Valley of the Khans Project, is a high-tech ground-, aerial- and satellite- based, remote sensing, non-invasive search for the tomb of Genghis Khan that was featured in a one-hour National Geographic Channel documentary film, “Forbidden Tomb of Genghis Khan,” which he also narrated. The effort earned him recognition as National Geographic Adventure Magazine’s “2010 Readers Choice Adventurer of the Year” and the 2011 Lowell Thomas Medal for Exploration from New York- based Explorers Club. Lin’s goal is to enable international protection of a sacred region of Mongolia. His team’s use of digital media to perform massive satellite data analytics through crowdsourcing (recognized with the 2011 United States Geospatial Intelligence Founda- tion Academic Achievement award) has been emulated for applications ranging from emergency response to humanitarian monitoring and led to the formation of California-based Tomnod Inc. where he served as co-founder and chairman of the Board of Directors until 2013, when the company was successfully acquired by the Colorado-based commercial satellite imagery provider, Digital Globe. He has been invited to present his work on massive-scale collaboration and crowd-based collective intelligence to organizations including the US Geospatial Intelligence Agency, Harvard Business School, and the Department of Defense.

TopCoder is the world’s largest Open Innovation Community of digital creators with over 500,000 members representing algorithmists, software developers and creative artists from over 200 countries. The TopCoder Open Innovation Community creates digital assets in- cluding analytics, software and creative designs and solutions for a wide-ranging client base through a competitive, rigorous, standards based methodology. Combined with our extremely talented community this groundbreaking methodology results in superior outcomes for our clients. 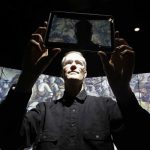 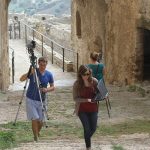