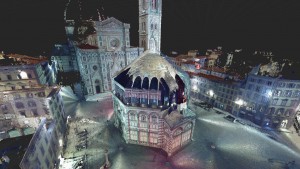 A 3D Model of the Baptistery, consisting of 2.5 billion data points

The Baptistery di San Giovanni is located in the heart of Florence, Italy. While dwarfed in size and fame by the adjacent Santa Maria del Fiore (Duomo) Cathedral, the Baptistery’s history and cultural significance equal, if not surpass, the Duomo’s. The earliest historical reference to the Baptistery occurs in 897 AD, long before Florence’s renowned renaissance, and the construction of the Duomo, had begun. The building was named the city’s official Baptistery in 1128, and for centuries most Florentine citizens were baptized within its walls, and still to this day religious services are held inside the monument. However, the foundations of the building are much older. The ecclesiastical edifice rests upon the remains of earlier structures, whose use and intention have been cause for much debate over the centuries. Legend holds that the site of the Baptistery originally featured a Roman temple dedicated to Mars. Excavations beneath the Baptistery in the early 20th century revealed that its walls do indeed rest upon Roman constructions that date to the 3rd century AD. The excavations disproved the theory of a temple to Mars, but their findings did validate the antiquity of the Baptistery’s foundations and excitingly expanded the already rich history of the site.

The Baptistery is an octagonal masonry structure with an eight-sided dome, which in total, measures just over forty meters in height. The interior of the building does not have any central supporting structure and the weight of the dome rests upon the eight walls. The dome itself has a dual shell construction, where the interior shell is decorated with glass mosaic tiles and the exterior shell helps to support the thrust of the interior dome as well as protect against environmental conditions. The entire exterior and most of the interior vertical walls are covered with marble slab facades, hiding the structural masonry walls. The one deviation from octagonal symmetry exists on the West side of the structure where the “scarsella”, or apse, is located. The previously mentioned excavations beneath the Baptistery begin beneath the “scarsella” and continue under one third of the Baptistery’s footprint. It is also important to note that the areas above the excavations are now supported with a modern reinforced concrete slab.