The California Institute for Telecommunications and Information Technology at UC San Diego (Calit2), now known as the Qualcomm Institute (QI), is celebrating its 15th anniversary.  Chancellor Khosla and dignitaries including former Governor Gray Davis, Qualcomm Executive Chairman Paul Jacobs, Qualcomm Co-Founder and former Chairman Irvine Jacobs and UCSD Jacobs School of Engineering Dean Pisano, united for a reception and showcase of QI innovation.  At the event, Davis and Calit2 Director Larry Smarr discussed the past and future of the Qualcomm Institute, with particular emphasis on the groundbreaking potential of the Pacific Research Platform (PRP) – a new National Science Foundation grant that uses fiber-optic networks to connect researchers at universities throughout the West Coast, enabling them to share “big data” at an unprecedented speed. One of the proof-of-principle, cyber-infrastructure sites for PRP that is already fully operational is CHEI’s WAVElab, hosting the Wide-Angle Virtual Environment (WAVE), a one-of-a-kind testbed for BIG-VR.

During the event, Professor Kuester presented a lightning talk about CISA3’s transformative impact and CHEI’s disruptive and synergistic work across Science, Technology, Engineering, Arts, Mathematics, as well as Music (STEAM). Following the vision of CHEI’s integrative, cultural heritage engineering methodology, the talk outlines a closed-loop, data acquisition, curation, analytics and dissemination approach, highlighting what is possible when you are an innovator and producer of technology, rather than just a consumer. As always though, our students and trainees were the true stars of this presentation. 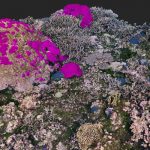 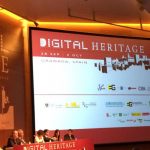